On September 19, 2014, the U.S. Immigration and Customs Enforcement (ICE) knocked on Francisco Aguirre’s home at 7 a.m. when he was showering. Because they didn’t have a warrant, Aguirre refused to open his door and talk with the agents. With ICE promising to return with a warrant, Aguirre fled his home with his wife and children to find sanctuary in Augustana Lutheran Church in Portland Oregon. 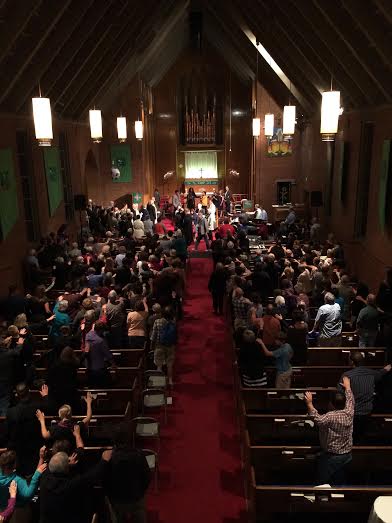 Sanctuary has often been sought out by all who face oppression.  Rev. W. J. Mark Knutson, Pastor of Augustana Lutheran Church, explained that “Sanctuary is an ancient principle: church as a place of safety and hope. Until the world itself is the sanctuary God intended, we must have places in cities and small towns where someone is safe when they are in crisis. That’s the role we see ourselves playing.”

Francisco Aguirre is originally from El Salvador, but came to the United States in 1995 after fleeing the violent aftermath of a civil war, in which his family was killed. As a community leader and co-founder of VOZ Workers’ Rights Education Project, he has helped claim stolen wages for workers and become a role model for his peers in the immigrant community.

On September 30, 2014 Augustana Lutheran Church hosted an interfaith service in sanctuary and solidarity with Francisco Aguirre and his family, drawing over 1,000 in attendance and prominent faith leaders – including ELCA Bishop Dave Brauer-Rieke and other Lutheran clergy. 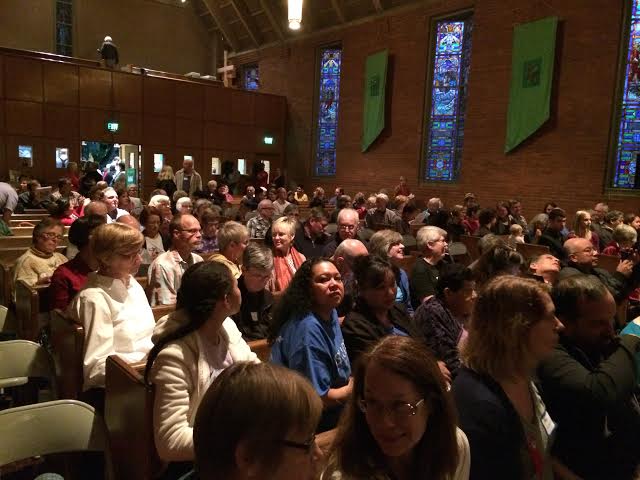 Together, faith leaders and people of faith came from all across the state of Oregon to stand together and demand Francisco’s freedom. As partners working at the intersections of oppression, ReconcilingWorks was proud to be present at the service and stand in solidarity with Francisco Aguirre and his family. We called on immigration officials to expedite the approval of his U-Visa so that he and his family can resume their daily life, free from fear of detention and deportation. We called on ICE to allow Francisco to do the right thing and finish  his court process without interrupting the justice system. We said not one more: not one more family separated, not one more child watching their parents taken away in handcuffs by immigration agents, and not one more day of waiting for Congress and the President to fix our struggling immigration system. 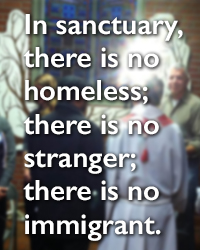 ReconcilingWorks  knows the identity of people and oppression is intertwined.  There are approximately 300,000 LGBT people in the United States that are also undocumented. In Oregon alone, there are 80,000 people left without a form of license or insurance driving on Oregon’s roads. Most importantly though, everyone deserves to have a safe, legal way to get to their school, work, church, and hospitals.

We are called to stand in solidarity with all who face injustice. ReconcilingWorks proudly affirms our call by standing in solidarity with Francisco Aguirre and the other 11 million undocumented individuals who call the United States home.