“Today I want to say as a Christian, as a priest, to all the LGBTI community, I am deeply sorry for our part as religious people, in the pain you have experienced across the ages. I have a dream that in my lifetime, I will hear all the leaders of all our great faith traditions making the same apology.” 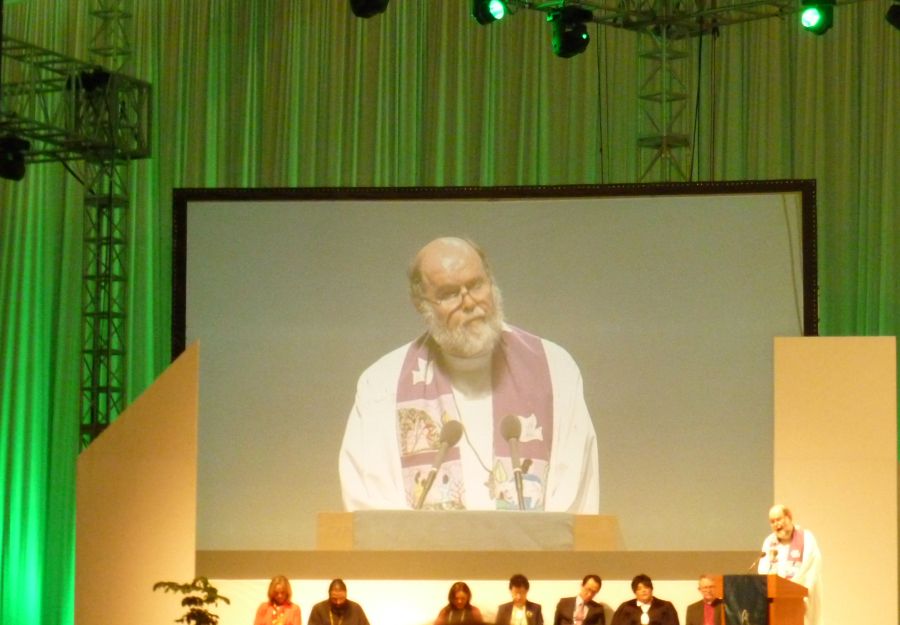 This apology came during the closing prayer session of the assembly of the World Council of Churches (WCC), held from October 30 to November 8 in Busan, South Korea. It was given by Father Michael Lapsley, Director of the Institute for Healing of Memories, which is headquartered in Cape Town, South Africa.

The WCC is the largest fellowship of Christian churches in the world, with member churches from over 150 countries and representing nearly 600 million parishioners. The general assembly convenes every seven years.

In an assembly that seemed to work hard to sidestep all mentions of sexual orientation or gender identity in its official plenary business, Father Lapsley’s words came as a welcome surprise to the LGBT advocacy groups and allies who were present.

Tim Fisher, ReconcilingWorks’ representative to the Create Safe Space Coalition (a partnership of advocacy groups from Europe, the United States, South Africa, Uganda, Indonesia, and Korea) said, “The WCC has yet to take an official stance of any kind on how the churches should treat LGBTQ people and their families, even in the face of many reports of abuse. Father Lapsley’s homily provided hope to LGBTQ people all over the world, many of whom are in dire situations in their home countries and churches as they face murders, beatings, harassment, shunning, and harsh legal restrictions.”

Father Lapsley’s own story speaks to the importance of acknowledging the violence and pain experienced by oppressed people as church and society work toward reconciliation. Lapsley was an active member of Nelson Mandela’s African National Congress during the Apartheid period. In 1990, he lost both his hands and an eye to a letter bomb sent by an Apartheid supporter.

In his homily, Father Lapsley said, “Some would say that it all comes down to the interpretation of God’s word. For me the question is: Do we believe that Revelation ended with the closing of the Canon of Scripture or does the Holy Spirit of God continue to lead us into all truth?

“While we have been here in Busan, it was decided in Germany that children could for the first time be registered as male, female OR the space could be left blank – an historic step towards relieving and acknowledging the pain for those who are born intersexed or find themselves to be transgendered. We know as St Paul taught us that in Christ there is neither male nor female.”

There were other encouraging signs at the WCC assembly. Notable among them was the passing of a resolution drafted by the Create Safe Coalition. Although significantly watered down by the time it reached the assembly floor, the adopted language will nevertheless help inform programmatic elements of the WCC’s future business over the next seven years. The final resolution reads:

“Being aware of divisive issues among churches, the WCC can function as a safe space to enter into dialogue and moral discernment on matters which the churches find challenging. Examples which have been heard strongly in this assembly include questions of gender and human sexuality. Held together by the ethos of fellowship and consensus, controversial issues have their place within that safe space on the common agenda, remembering that tolerance is not enough, but the baseline is love and mutual respect.”

Tim Fisher said, “Given the extremely cautious nature of the WCC overall, and the often delicate ecumenical relationships within it, the passage of this language is remarkable. Any mention of gender and sexuality in the framework of safe space represents significant progress. I give thanks for the perseverance, collaboration, and friendship of the members of the Create Safe Space Coalition in Busan.”

You can read the full text of Father Michael Lapsley’s homily here.