2013 has been a historic year for ReconcilingWorks and the LGBTQ movement as a whole. As you celebrate 2013’s achievements with us, take a look back at some of our favorite resources, snippets, videos, and books. Some are from ReconcilingWorks while others have been produced by our movement partners.

Thanks to your prayers and continued support, faith organizing efforts across the country have helped the number of states with marriage equality double! Also three LGBT affirming memorials passed at this summer’s Evangelical Lutheran Church in America’s 2013 Churchwide Assembly. (Ministring to Same Gender Couples, Uniting American Families Act, Employment Non-Discriminiation Act). And for the first time in history the Senate passed a trans* inclusive Employment Non-Discrimination Act. Thanks again to those of you who added your Lutheran voice to the Faith’s Calling campaign this fall. Let’s also not forget that the ELCA has it’s first ever openly gay partnered and first ever Native American Bishop, the Rev. Dr. Guy Erwin.

10. TransAction: A Transgender Curriculum For Churches and Religious Institutions

transACTION is designed to help churches and institutions address this issue of understanding and welcome by providing step-by-step training about the needs, apprehensions and fears of transgender people — as well as the wealth of gifts and graces they bring — while responding to the concerns of the church or religious institution.

“We tried to make this a learning experience that would go beyond just the basics of gender identity and gender expression in order to give participants an understanding of the issues and concerns that transgender people have when trying to express their faith and spirituality in a church or any religious setting,” says Barbara Satin, author of the curriculum and a transgender advocate around issues of faith and aging.

9. Where All Can Safely Live 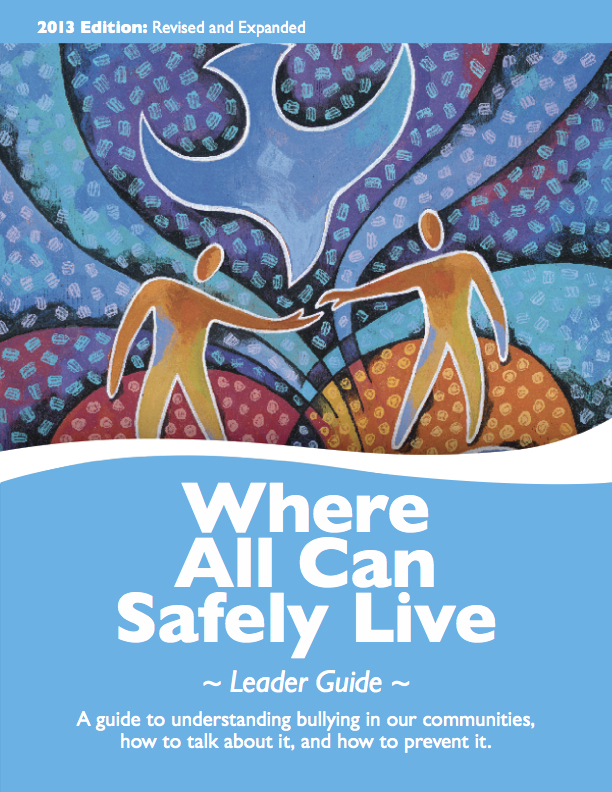 This anti-bullying curriculum is an introduction to what bullying is, how it functions, and why we as Christians are called to prevent it from happening in our communities. It was developed with the help of the staff at the Pacific Violence Prevention Institute, from the pioneering research on bullying by Dan Olweus, and materials created by the United States government. Revised and expanded in 2013.

This curriculum is not intended to be a comprehensive guide to stopping bullying. However, this guide provides a basic understanding of how bullying works and offers suggestions for steps in creating a congregational bullying prevention plan.

The companion resource, Where Hands Will Reach, is also available for free and features devotions, stories, and reflections from ELCA pastors, parents, theologians, and others. Great for Bible studies, book clubs, and other forums!

8. Torn: Rescuing the Gospel from the Gays-vs.-Christians Debate

Nicknamed “God Boy” for his passionate evangelical faith, Justin Lee was outspoken against gay acceptance. But when questions about his own sexuality emerged, Lee discovered that neither he nor his Christian friends and heroes knew how to respond.

Torn is the story of Lee’s 15-year journey to understand both sides of the gay debate—from bullied teens to ministry leader scandals, from churches to gay bars—and, ultimately, to find a way to bring us back together. In it, he chronicles the discoveries that shocked him, the stories that broke his heart, and the lessons he learned about what the church is doing wrong and how we can make it right.

“This book is full of three things that are not always much in evidence in our debates on sexuality–fresh air, common sense and manifest love of Christ. What makes it different is that it is not essentially about arguing a case but abut bridging the gaps of understanding and sympathy that (inside and outside the Church) have distorted or muffled the overwhelming miracle of Gods gift in Christ and in Scripture. I welcome it very warmly.” (Honorable Reverend Dr. Rowan Williams)

“Justin didn’t leave the church when he realized he was gay…he has been too determined to show them how much he loves them…This is the story of how one Christian man’s faith taught him to accept himself, serve others who are in need, and bridge the gap for those who do not always understand.”
(Jennifer Knapp, Singer/Songwriter, Founder of InsideOutFaith.org)

The heart of the Reformation, “the doctrine by which the church stands or falls,” as Luther wrote, is “justification by faith.” To people dreadfully anxious about their salvation, Luther declared that our behavior–whether good or bad–had nothing to do with fixing our relationship with God. God fixes the relationship … as a gift.

Being true to the Lutheran confessions means using the principle of “justification by faith” to ask afresh in every era, “what shall we say now in order to be life-giving today?”

Four hundred and ninety-six years later, ReconcilingWorks is asking YOU that same question. What will we say, what will we do, that’s life-giving for LGBT people?

6. Queer Clergy: A History of Gay and Lesbian Ministry in American Protestantism

Attorney, historian, and novelist, R. W. Holmen brings a unique voice to the conversation of gay clergy in the pulpits. Queer Clergy: A History of Gay and Lesbian Ministry in American Protestantism provides a detailed history of the ways in which the United Church of Christ, Episcopal Church, Evangelical Lutheran Church in America, the United Methodists, and the Presbyterian Church (U.S.A.) have dealt with the issue of ordaining gay clergy. Queer Clergy provides an important historical reference for continuing dialogue.

Rev. Amy DeLong is a Methodist minister. She is also a partnered lesbian. After she officiated at a “holy union” ceremony of a lesbian couple, she became the subject of a highly publicized ecclesiastical trial in Wisconsin in 2011. She writes:

“Author RW Holmen tells the story of the courage, persistence and faith of LGBT people and our allies as we have struggled for full and equal rights within the ecumenical denominations. Holmen has captured in detail our fervent belief in the grace of God and the gospel-strength of our cause. I am grateful that this narrative of our risk-taking saints and sages is preserved under one cover.

Holmen also reveals the well-organized, well-funded extra-denominational forces which have been at work to systemically silence our voices and the strategies used by right-wing groups to hoodwink otherwise decent people into believing their propaganda about the “dangers” of LGBT people. Queer Clergy tells the truth about how LGBT people have been used as a political wedge to raise fear and money.

This book should be read with a sense of indebtedness for those who have risked their worldly securities to help bring justice to our blasted, beloved churches and with repentance for our own complicity in systems of oppression.”

Rev. William R. Johnson was the first openly gay man ordained in a mainline church (UCC) in 1972. He has continued to serve as a pan-denominational spokesman for LGBT issues to the present.

“I have always known that this historical overview of the religious LGBT movement was needed not only to tell our movement stories to the masses but to make same-gender loving people aware of a significant but often overlooked part of their own history. This is a significant work by justice ally Obie Holmen — a singular contribution toward the full inclusion of LGBT people within Christian community and society. Many will be surprised by the breadth and depth of the movement in the Church.”

The program: “A La Familia, A Conversation About Our Families, the Bible, Sexual Orientation and Gender Identity” is a multi-faceted program designed to promote full inclusion of LGBT people within Latin@ communities, using the core Latin@ touchstones of faith and family. The goal is to foster an ever-expanding dialogue across Latin@ communities and nurture new partnerships with congregations and organizations by focusing training efforts in places where the need is the most acute and the opportunities for expanded reach are the strongest.

The movie: The new short film, Before God: We are all Family is a story of reconciliation that documents the compelling journey of five Latino families who reconcile their unbreakable love for each other and their deep commitment to living faithful lives in the face of religious-based intolerance of those with different sexual orientations and gender identities.

4. Our Congregation Is Already Welcoming, Why Do We Need to Say So? 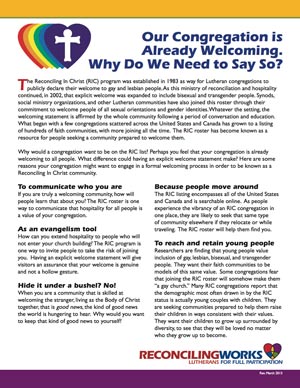 Why would a congregation want to be on the RIC list? Perhaps you feel that your congregation is already welcoming to all people. What difference could having an explicit welcome statement make? Here are some reasons your congregation might want to engage in a formal welcoming process in order to be known as a Reconciling In Christ community.

Visit other Reconciling in Christ Resources including Frequently Asked Questions, Sample Affirmations of Welcome, Transgender and Gender Non-Conforming People – Expanded FAQs, How Can Our Congregation Help Expand the Number of RIC Congregations in Our Area?

The overwhelming message of the Bible, in story after story, is that of God’s radical love and welcome. Every time we think we know who’s in and who’s out, God does something to challenge those assumptions, to unbind our hearts and minds from old ways of understanding, and to draw the circle ever wider.

HEARTS UNBOUND, written by David R. Weiss, invites you to explore ten of those inspiring stories of radical love and welcome. Entertaining, thought-provoking, and participatory, each session looks in-depth at the story, the historical context out of which it came, and some of the insights to be gained.

Designed to be used as a small-group Bible study, HEARTS UNBOUND uses the format of Reader’s Theater. But fear not… no costumes, sets, or refined acting chops needed! All you need are six to eight people around a table, reading the script, having fun, all the while learning a great deal in the process.

All ten sessions are available for free download below.

2. Coming Out as a Person of Faith

Check out “Coming Out as a Person of Faith,” a multi-media exhibit sharing the stories of LGBTQ and allied clergy, couples, and family members who support the freedom to marry. And who doesn’t love Macklemore’s “Same Love” hit as the background track for this beautiful video?

Brought to you by the Basic Rights Education Fund.

In an anxious world, Psalm 27 makes a bold claim: Don’t hide in fear’s shadows—come, live in the light! As a Reconciling In Christ community, you know what it means to answer this calling. You are a church where people of every sexual orientation and gender identity are welcome to live without fear.

This year many congregations will celebrate Reconciling In Christ Sunday on January 26, 2014, the third Sunday after Epiphany. Will you?

Wondering “How am I going to plan an RIC Sunday service?”. Not to worry! ReconcilingWorks has made original worship resources available below for download. These resources include sermon notes, suggested hymns, a bulletin insert—even ideas for a children’s sermon!

RIC Sunday is a time for your congregation to remember and recommit to the process of welcoming all to live in God’s light. Voting to become an RIC congregation was just the beginning of your journey. Consider some of the following activities:

If your congregation can’t celebrate with other RIC churches on January 26, you are welcome to adapt the prayers and litanies for use another Sunday—perhaps your anniversary of becoming a Reconciling In Christ community, or a Sunday in the month your community celebrates LGBT Pride.