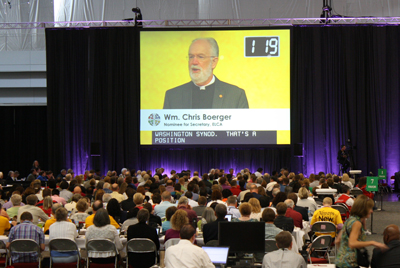 ReconcilingWorks celebrates the election of The Rev. Wm Chris Boerger to a six-year term as Secretary of the Evangelical Lutheran Church in America (ELCA) on August 16, 2013, at the Churchwide Assembly in Pittsburgh, Pennsylvania.

Emily Eastwood, Executive Director, said “Pr. Chris Boerger has been an ally for full participation for many years.  His prophetic witness in favor of civil marriage equality for same-gender couples before the Washington State legislature was remarkable in its clarity.  Chris ordained our own regional director, Pr. Kari Lipke, and has been an avid supporter of clergy in same-gender relationships as their bishop. Secretary-Elect Boerger is a fine parliamentarian and has an excellent working knowledge of the governing processes and documents of the denomination.  We applaud his election and look forward to the ways in which we may partner with him in the years ahead.”