ALL Things NEW at the 2013 ELCA Churchwide Assembly

The 2013 ELCA Churchwide Assembly was as awesome, uplifting, and Spirit-filled as these wonderful gatherings of Lutherans are.  There were history-making firsts: the election of the fourth presiding bishop, the first female to hold that office, Elizabeth Eaton, bishop of the Northeastern Ohio Synod; Chris Boerger was elected Secretary of the ELCA; the presence and preaching of Guy Erwin, bishop of the Southwest California Synod as of September 21, 2013 and the passage without opposition in debate of three memorials regarding LGBT people.

Bishop Eaton publically stated that decisions of the 2009 ELCA were the correct ones, that there was a place in the ELCA for those who strongly agreed with that and those who did not, and that any dialog with those who left was going to have to be both open and civil.

The Rev. Chris Boerger was elected Secretary of the ELCA.  In his previous position as bishop of the Northwest Washington Synod, he testified in favor of marriage equality before the Washington State legislature.

Bishop-elect Guy Erwin preached at the Festival Worship celebrated by Dean Nelson, bishop of the Southwest California Synod till September 21, 2013.  Erwin’s sermon is posted here on YouTube for you to watch and hear.  Erwin is openly gay and partnered.

The three memorials on LGBT concerns sent to the churchwide assembly by synods were passed without opposition in debate by the assembly, the first two en bloc and the third following a debate in which no one voiced opposition. 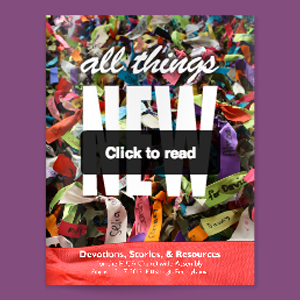 Memorial on the Uniting American Families Act, calling on the church to support comprehensive immigration reform that includes provisions that preclude discrimination against LGBT people and their families.

Memorial on the Employment Non-Discrimination Act, calling on the church to continue and make public its support of for a fully inclusive ban on discrimination in employment that includes that based on sexual orientation and gender identity.

Additionally, we are very pleased that the assembly also passed a resolution on Voting Rights, calling on the church to publically speak out in favor of guarantees of voting rights for all citizens.

Overall the 2013 Churchwide Assembly was a gathering of God’s people, doing God’s work with the church’s hands… all our hands, lifting both in prayer and to lean into the work of spreading the message of Christ to and for all.

All Things New at the 2013 ELCA Churchwide Assembly

Sermon from Bishop-Elect Erwin will be history in the making