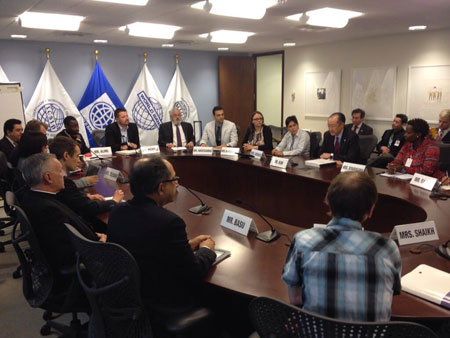 Last week the World Bank’s Spring Meetings drew to a close. It has been less than a month since the World Bank delayed a $90 million loan to Uganda in light of the recently enacted Anti-Homosexuality Act. In a powerful op-ed announcing the delayed loan, Bank President Dr. Jim Kim spoke out against discrimination on the basis of sexual orientation and gender identity.

ReconcilingWorks’ Director of International Programs, Philip Moeller, sent Dr. Kim a letter last month in anticipation of this meeting. The text is available here below.

Re:  Pulling of Uganda Health Project for Review

Since 1991 I have served as an institutional development consultant to the World Bank, mainly in the infrastructure sector and increasingly working with political economy and social assessment.  Mid-way through this time frame I joined GLOBE and also became the Director of International Programs for ReconcilingWorks, formerly known as Lutherans Concerned/North America.  It is from the perspective of all three “lenses” that I write this letter.

I have been especially pleased to see GLOBE move from a concern for LGBT staff/spousal rights to a consideration of access for the LGBT community to client activities supported by the World Bank, and twice in the last two years I have helped organized workshops on LGBT issues respectively for Spring and Fall bi-annual meetings.  I was especially pleased to be at a supplemental workshop when you took the microphone and gave your support of LGBT advocacy in the context of the development work of the World Bank, saying that “when one goes down the road of social justice one does not go half way.”

Our organization has been especially concerned with the deteriorating situation In Uganda and the implications of the passage of negative legislation in Uganda that would further marginalize and restrict the participation of the LGBT community in health services and a wide range of other services.  We were especially pleased to learn of your decision to pull for review the proposed additional financing for the Uganda Health Project.  This act certainly reflects your previous statement on not going half way down the road of social justice.

We understand the dedication of the World Bank to due process and best practice and know that this will be applied to the review process for the additional financing.  Within that frame we note that there was no commentary on social issues in the original request for additional financing.  We are sure that any further consider of the request would require such discussion.

Along with that discussion we understand that the review would include an assessment of how the recent legislation would affect access to the benefits of the project by the LGBT community.  Clearly consideration must also be given to the impact of this legislation on the staff of the World Bank and any local staff employed under the project in terms of service provision to the LGBT community.  The review would also seem to offer the opportunity to consider sensitivity training for health personnel in general on the issue of health service provision for the LGBT community.

In passing we would also note the recently completed study of the “Cost of Homophobia” for development.  The association of the World Bank with Nordic Support with this study is most commendable, timely, and relevant.  It should be a foundation stone for a new threshold to the portal for LGBT inclusivity.  We applaud this substantive addition to social realism.  We would also note our support for specific targeting of LGBT inclusion in the revision underway of the safeguards of the World Bank.

We want to communicate our support for your decision to call for this review.  We would also underline the fact that there are such faith-based organizations as ours that commend this action and seek full access for the LGBT community in the development process.  This is the essence of a comprehensive base to development.  If any are marginalized on any basis we all are marginalized.  If there are marginalized peoples, poverty cannot be eliminated.

Again, we thank you for your walk along the road of social justice.

After more than a decade, the World Bank is now reviewing its safeguard process as a whole, which has led to an opportunity for LGBT to propose a new safeguard that identifies and mitigates potential negative impacts of Bank projects on LGBT individuals, like keeping LGBT families together when displaced by infrastructure improvements. Such a safeguard would make it mandatory for Bank projects to be assessed on their impact on LGBT communities in the region the projects are implemented.

In many countries across the world, the World Bank funds projects in the health, poverty alleviation, and refugee assistance sectors. Due to laws that criminalize or don’t recognize LGBT citizens, such projects are nearly impossible be accessed by these vulnerable populations. The motto of the World Bank is to “end poverty,” and in a great discussion activists pointed out that the face of poverty are the sexual minorities, the excluded classes, and that lack of equal opportunity to work, to gain access to education, health services, and monetary support results in marginalizing the LGBT community even further.