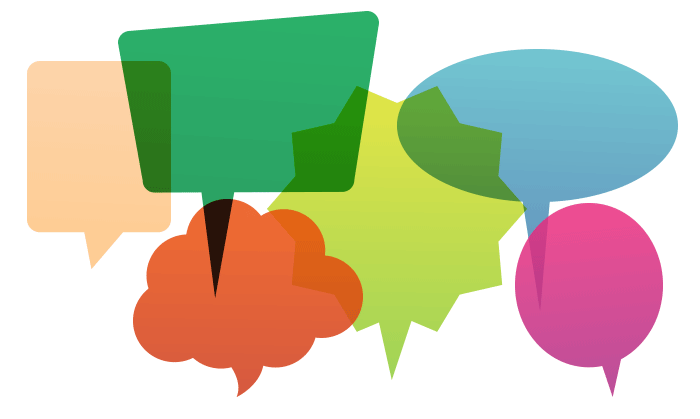 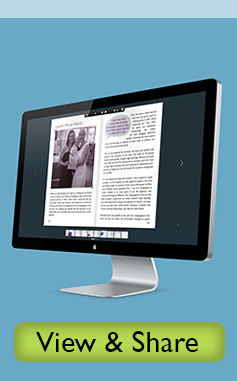 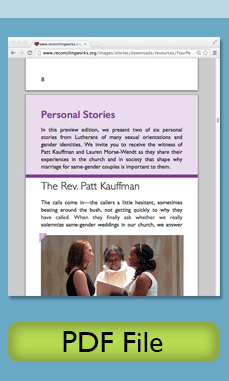 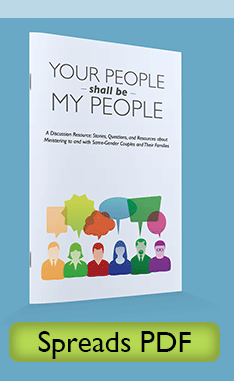 An adult study for congregations. This helpful resource was developed by the Oregon Synod (ELCA). With permission, it has been adapted slightly for use outside of the Oregon context.

A memorial passed by the Churchwide Assembly asking for continued conversations in congregations and synods about how to minister to and with same-gender couples and their families.

How Does Marriage Matter

Hear the witness of several Lutheran couples and families about how marriage matters to them. Produced in April 2012, 8 pages.

Marriage Equality in the 21st Century: What Would Luther Say?

An academic paper written by Sue Best, MSW, LCSW, member of Augustana Lutheran, Portland, Oregon, and a student at the School of Theology and Ministry at Seattle University.

Lutheran Theology and the Freedom to Marry

A shorter summary of the above paper, “Marriage Equality in the 21st Century: What Would Luther Say?”

What God Has Joined

An analysis of how the personal spheres of trust and commitment associated with marriage are connected to social matters of racial and economic justice. This was the headliner essay for the June 2013 issue of Sojourners magazine, written by Rev. Dr. Susan Brooks Thistlethwaite, professor of theology of Chicago Theological Seminary.

The ELCA passed this social statement on human sexuality in 2009. The statement is grounded in the biblical witness to the relationship God establishes with creation as a model for relationships between human beings. God is absolutely trustworthy and faithful, and therefore, with regard to sexuality, both human behavior and social structures are considered in relation to how they foster trust, commitment and protection for the flourishing and wellbeing of all people. The statement provides guidance on key matters such as marriage, family, homosexuality, protecting children and youth, sexuality and the self, sexual intimacy and cohabitation. En español.

Homosexuality and the Bible

Fish Out of Water (film)

A documentary film showcasing the seven Bible verses that are most often used to condemn homosexuality and same- gender marriage. The director interviews ministers with a diversity of perspective on human sexuality and the Bible for the film.

For the Bible Tells Me So (film)

Through the experiences of five Christian families, we discover how insightful people of faith handle the realization of having a gay child. This video offers healing, clarity, and understanding to anyone caught in the crosshairs of scripture and sexual identity.

A documentary film about Bishop Gene Robinson, the first openly gay person to become a bishop in the historic traditions of Christendom.

A short primer for those interested in pre-marriage counseling and wedding day considerations. By the Rev. Michael Fick, Ebenezer Lutheran Church, Chicago, Illinois.

Going to the Chapel: A Quick and Easy Guide for Attending the Ceremony of LGBT Friends or Family Members

“So the invitation has come. Maybe you saw it coming. Maybe it’s a surprise! But you’re invited. In this time of greater civil and religious public recognition of LGBT relationships, most of us will be invited to such an event sooner or later. Here’s a quick and easy guide to help you make the most of the experience and be a great guest.” By the Rev. Michael Fick, Ebenezer Lutheran Church, Chicago, Illinois.

The Institute for Welcoming Resources

The Institute for Welcoming Resources has a helpful list of pastoral care materials.

There is no wedding liturgy approved by the ELCA for use in ELCA contexts that is inclusive of same-gender couples. Please see the following resources for ideas for appropriate liturgies, including some from full-communion partners of the ELCA.

With permission from Augsburg Fortress, the ELCIC has adapted the Order for Marriage found in Evangelical Lutheran Worship (ELW). The adaptation is appropriate for use with same-gender couples and opposite-gender couples. However, this adaptation is authorized for use only in the ELCIC, not the ELCA (although the ELCA is the copyright holder). The changes involve replacing the words wife/husband with spouse, and there are a few other minor changes in wording. This provides a common liturgy for all couples, without distinction based on sexual orientation.

From 2002–2005, the ELCA provided a gender-neutral wedding liturgy as part of a series of volumes for provisional use called Renewing Worship. It is no longer available from Augsburg Fortress, but hard copies are still available for purchase from online book sellers. On Amazon.com, search for “Life Passages Rw V4.”

The Episcopal Church has authorized liturgical resources appropriate for same-gender couples called I Will Bless You and You Will Be a Blessing. This resource includes theological resources for study as well as liturgies.

Services of Blessings of Relationships

Prepared by St. Paul–Reformation Lutheran Church in St. Paul, Minnesota. This booklet includes several services of blessing of a relationship, a Communion Service of Thanksgiving for supportive family and friends, as well as theological background.

Book of Worship – Order for Marriage
United Church of Christ

This order for marriage has been adapted from the United Church of Christ Book of Worship “Order for Marriage” to provide language that may be used for any marriage, regardless of gender.

Those who have been legally married and who wish to have their marriage affirmed by their faith community may choose the Affirmation of Marriage liturgy in the in ELW Occasional Services volume. It utilizes language appropriate for same- gender couples.

Basic information about the RIC program of public welcome.

A sampling of welcoming statements in use at one or more of our current RIC settings. For use as guides, templates, or inspiration in writing an affirmation that proclaims the unique commitment to welcome in your community.

Our Congregation Is Already Welcoming, Why Do We Need to Say So?

The importance of a public welcome.

Your Congregation Is RIC: Now What?

Ideas for sharing your story and encouraging other faith communities to join you in making a public welcome.

Drawing upon thirty years of experience within a variety of Christian denominations, this Toolkit is a step-by-step guide to help facilitate a Welcoming Process in your local congregation. Biblically and theologically based, it uses tools of relational organizing, congregational assessment, conflict management and change theory. From the institute of Welcoming Resources.