Bishop Ann Svennungsen, ELCA Minneapolis Area Synod, joined over 150 members of clergy Thursday to urge fellow Minnesotans to vote no on the freedom-limiting marriage amendment that will appear on the ballot in November. If passed, the amendment would put a ban on marriages for same-gender couples into the state constitution. 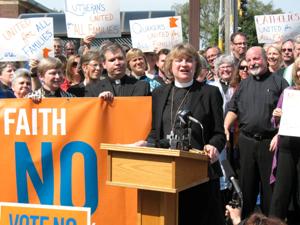 The clergy, representing more than a dozen denominations from throughout Minnesota, gathered outside the main entrance of the Minnesota State Fair grounds on the opening day of the fair to hold a press conference. Bishop Svennungsen addressed the assembled crowd and members of the press:

“As Lutherans, we believe it is possible for people of faith to arrive at different positions on this issue and to respect the bound consciences of others. I believe it is incredibly important that we speak with love and respect, especially when we disagree.

“Indeed, one of the greatest concerns if we pass this amendment is that it forecloses the kind of conversation we need in our world–informed, respectful conversation often lacking in this polarized society.

“We Lutherans also believe that the Biblical vision of justice also calls us to protect civil rights and prohibit discrimination of all people.

“We believe that God works through the wonderful structures of marriage and family for the common good and that we are all called to support relationships of lifelong fidelity and trust–support that is often lacking in the 21st century.

“Finally, at the center of the Christian faith is the Gospel of Jesus Christ and his radical welcome for all people. As we Christians try to live faithfully in our wonderful, mysterious, and ever-changing world, we seek to pattern our lives on the radical welcome we have received from Jesus Christ.”

Thursday’s event was organized by Minnesotans United for All Families, a coalition of over 560 partner organizations forming the official campaign to defeat the proposed constitutional amendment. ReconcilingWorks is a coalition member.