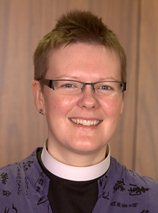 Kari Lipke joined the ReconcilingWorks staff in late July to help organize Lutherans in support of the Washington United for Marriage Referendum 74 campaign. Her work on the campaign was made possible, in part, through a partnership with Gethsemane Lutheran in Seattle.  At the successful completion of that campaign to bring marriage equality to the state of Washington, Kari will continue part-time as the ReconcilingWorks Regional Director for Region 1, which includes Alaska, Washington, Oregon, Idaho, Montana, and a tiny slice of Wyoming.

As Regional Director, Kari will assist congregations, synods, and other organizations in the region to become Reconciling in Christ (RIC) and help them live into the new policies of the ELCA in both pulpit and pew. She will work from Seattle.

“The board approved the part-time position at its fall meeting,” said Executive Director Emily Eastwood. “We know, especially from the recent organizing work in Washington, Minnesota, and Maryland, that having paid staff, even part-timers, dramatically increases the reach of our work for full inclusion. We are blessed indeed that she has decided to join us.”

“Kari brings with her an extraordinary array of Lutheran relationships, both in Washington State and beyond. Her work during the Washington campaign for marriage equality was, by all accounts, remarkable. We also highly value the collaborative relationship we had with Gethsemane Lutheran, Seattle, which enabled her to do that work. Collaboration with creative congregational ministries, synods, and other Lutheran non-profits who have part-time staffers within a given region is now possible in the post-policy change ELCA.”

Kari is an approved candidate for ordained ministry in the ELCA. She lives with her spouse, Joanne, and their dog, Stella, in Seattle. Kari grew up on a farm in Minnesota. She earned her BA at Gustavus Adolphus College in 1998, her M.Div. at Harvard Divinity School in 2011, and completed her supervised congregational internship through Luther Seminary this past August. She worked at Gustavus from 1998 to 2008, first for two years as an AmeriCorps VISTA organizer, organizing literacy and tornado-recovery projects in the St. Peter community, and then for eight years as an administrator in the Chaplains’ Office and Community Service Center. During these years, Kari volunteered extensively at First Lutheran Church in St. Peter, serving as a volunteer youth director, a member of the Christian Education team, council chairperson, and as part of the team that shepherded First Lutheran’s successful RIC process. Kari also taught yoga in St. Peter, both on campus and in the community, including a weekly group for offenders at a local juvenile facility. In 2008, Kari entered candidacy in the ELCA and began formal theological education in Cambridge, Massachusetts. During her three years there, she worked for University Lutheran Church as the Coordinator for Young Adults and Graduate Students. In the last two years, she also served as lead confirmation teacher.

On May 22, 2011, Kari and Joanne were married at University Lutheran. The two moved to Seattle that summer: Joanne to a new call as pastor of Gethsemane Lutheran Church and Kari to a seminary internship at St. John United Lutheran Church (both RIC).