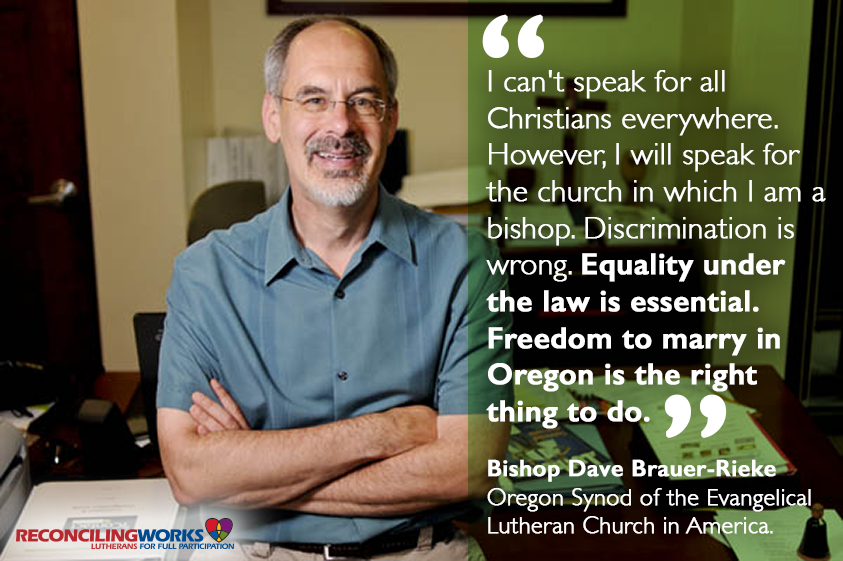 By Bishop Dave Brauer-Rieke
Originally printed in The Oregonian

It just ain’t so!

Public opinion polls suggest that people see Christians as anti-homosexual, closed minded and legalistic. Some may be. Like any other group, one shouldn’t assume Christians are all the same. At the same time, many of us cringe under such a characterization.

My church, the Evangelical Lutheran Church in America, the largest Lutheran denomination in the U.S., has always and unwaveringly supported civil rights for all people. This includes individuals who are gay, lesbian, bisexual or transgender.

This past weekend, our Assembly of Oregon congregations overwhelmingly affirmed the freedom to marry for same-gender couples in Oregon. Thank you, Judge McShane, for doing the right thing. Same-gender couples, their children and their families deserve the same protections, support and respect that everybody else receives. There can be no question about this.

Again, though, Christians are not all the same. Now that marriage is legal for same-gender couples in Oregon, it doesn’t mean that every Lutheran church will choose to officiate at same-gender weddings. We are different, and mutual respect is a core value for us. We live peacefully with our own internal diversity.

We do not, however, live peacefully with discrimination. Religious freedom means that clergy and congregations may make decisions about whom to marry.  A government official or business, however, does not. Religious freedoms are important. So are basic civil rights. We mustn’t confuse the two.

So it is that our recent Assembly of Oregon Lutherans also passed a resolution “to stand in opposition to any and all attempts to legalize discrimination in the name of religious freedom.” We were referring here to the recently proposed Oregon Family initiative IP 52 – “Exempts religious opposition to same sex marriage/civil union/domestic partnership from penalties for discrimination.”

Lutheran pastors choose whom they will or won’t marry. Lutheran bakers, however, knead bread for all the world. Lutheran gardeners care for anybody’s lawn. Christians are called to serve their neighbor, whoever they are. In the public realm, Christians do not pick and choose.  It is our privilege, and God’s glory, that we serve any and all as if they were Christ himself.

I can’t speak for all Christians everywhere. However, I will speak for the church in which I am a bishop. Discrimination is wrong.  Equality under the law is essential. Freedom to marry in Oregon is the right thing to do.  We rejoice.

Dave Brauer-Rieke, of Milwaukie, is bishop of the Oregon Synod of the Evangelical Lutheran Church in America.