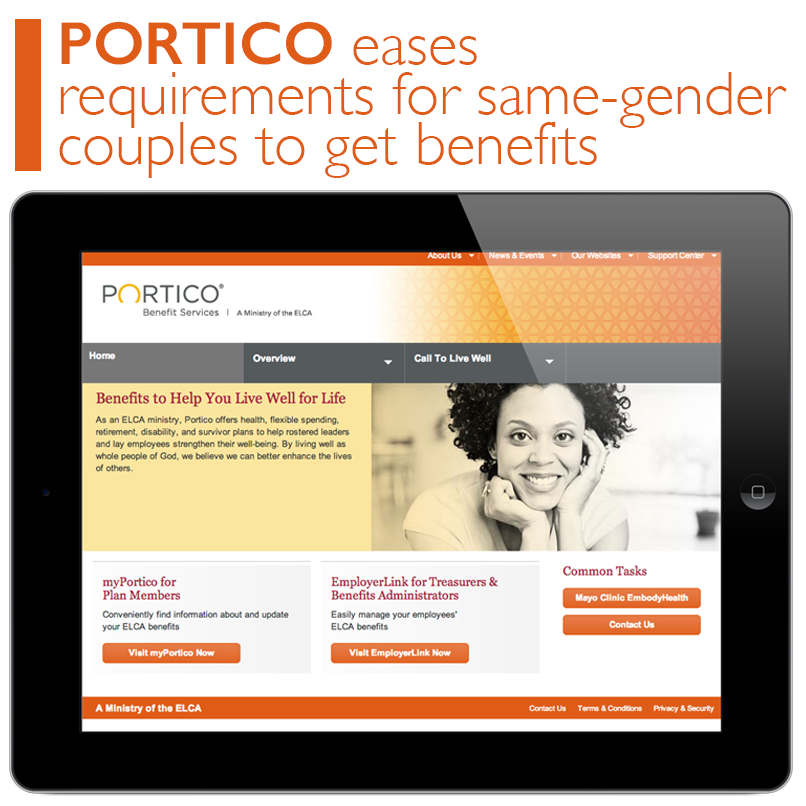 Portico, formerly the ELCA Board of Pensions, has changed its policy and will now accept marriage licenses as proof of relationship for both same-gender and opposite-gender couples. Portico provides health insurance and retirement-savings services for pastors and other employees of ELCA congregations and affiliated organizations and, like other employer-provided insurance plans, extends insurance benefits to spouses, partners and dependents of insured employees. The new policy essentially eases the requirements that same-gender couples must comply with in order for a spouse of a Portico-covered employee to receive benefits.

The change in policy follows meetings and discussions by The Rev. Jeff Thiemann, president and CEO of Portico Benefit Services, with staff of ReconcilingWorks over the past few months. Before the change, same-gender couples who were legally married were required to complete an affidavit attesting that their relationship was publicly accountable, lifelong and monogamous. The affidavit required the signature of the synod bishop for validation.

Portico said that its policy update “recognizes that same-gender marriage is legal in a growing number of states and consistent procedures should be implemented that treat similarly situated individuals in a similar manner, regardless of gender.” Portico added that it expects to transition to a single standard for same-gender and opposite-gender spousal/partner benefit eligibility as the number of states that permit same-gender marriage increases.

Portico’s policy change comes at the same time that ReconcilingWorks has been addressing the policy changes of another ELCA-related institution—Thrivent Financial—related to LGBT people. In the past few months, Thrivent has changed its policies in its member-outreach programs to exclude organizations like ReconcilingWorks from receiving funds from these programs, claiming that its work in advocacy for LGBT people is a “distraction.”

While Portico is an official “ministry of the ELCA” as reflected in its tagline, Thrivent is an independent organization but is closely affiliated with the ELCA and other Lutheran church bodies because of its history and the thousands of Lutherans it serves.