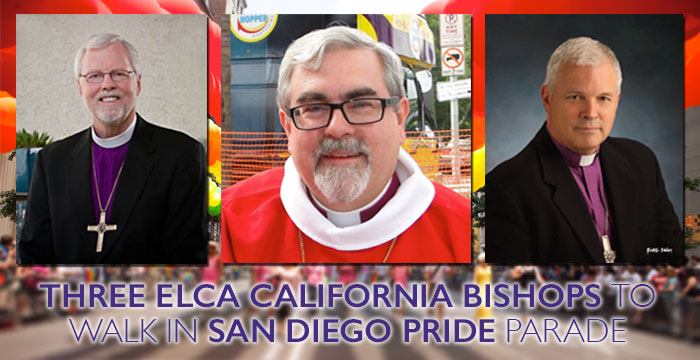 On Saturday, July 19th, three ELCA California bishops, Bishop Murray Finck, Bishop Guy Erwin, and Bishop Mark Holmerud will march in the San Diego Pride Parade along with their spouses, marking the first time all three California bishops will march together in a Pride parade.

All ELCA Lutheran congregations… are invited to join this historic occasion as we celebrate the ELCA’s increasingly open and affirming position toward the LGBT community.

On Sunday, July 20, at 9 & 11 a.m., the three bishops will be at First Lutheran Church, 1420 3rd Avenue, San Diego, CA, as First celebrates its 25th anniversary as a Reconciling in Christ congregation.  Bishop Erwin, the first openly gay and openly Native American bishop of the ELCA, will preach at both services.

In 2009, the ELCA adopted a more inclusive policy on human sexuality, ending a rule which required LGBT clergy to remain celibate, prompting Bishop Erwin’s ordination in 2011 and election in 2013 to a six year term as bishop of the Southwest California Synod.

San Diego’s LGBT Pride Parade is on Saturday, July 19th and begins at Normal and University in the Hillcrest neighborhood of San Diego, and continues down University to Sixth Avenue, ending in Balboa park.  The parade starts at 11am.  If your congregation plans to march, please call Pastor Wilk Miller at First Lutheran Church (619-234-6149) or email him at pastormiller@firstlutheransd.org.  Your congregation is invited to bring a banner to the parade.