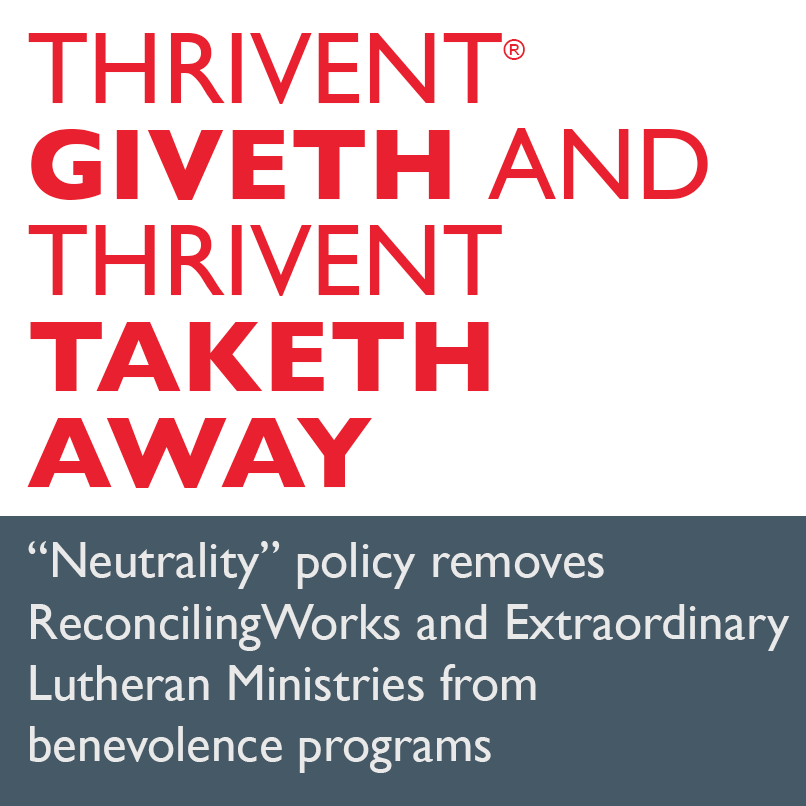 On February 6, Thrivent Financial implemented a “neutrality” policy that removed ReconcilingWorks and our partner in ministry Extraordinary Lutheran Ministries from its benevolence programs. This decision was made by a small management team, not by the membership or board of Thrivent.

The reason given for the change was our programming focus on sexual orientation which we were told, has “the potential to distract” their members from Thrivent’s mission to promote financial health and inspire generosity.

Thrivent says it has defunded previously approved organizations on all sides of several issues including abortion, guns and sexual orientation. The list of approved and defunded organizations has not been made public. 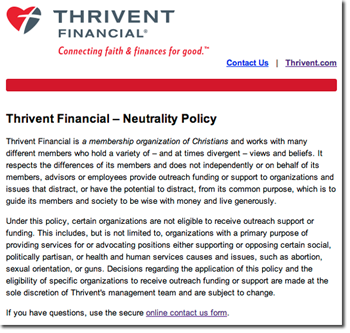 For several years ReconcilingWorks had benefited from Thrivent chapter funds and employee matching gifts—receiving up to $2,500 a year. In the fall of 2013, after years of applications and denials, we were approved for Thrivent’s innovative Choice Dollars program. In the first four months, we received over $2,700 in benevolence from Thrivent which had been designated to us by Thrivent members.

The February 6th announcement changing the policy to exclude ReconcilingWorks came without warning or discussion. Only members who had designated our organization (Thrivent has us under the name Lutherans Concerned) were notified. Awareness of the change is still very limited.

Gregory Jahnke, a Thrivent field representative for 23 years and longtime member of ReconcilingWorks, wrote these courageous words to the management team after the decision:

“LGBT people have lived outside their communities—their families, their workplaces, their churches—for too long. The ones who are still hanging in there with those groups are the strong ones, the committed ones, the believers. And they are the ones who are often Thrivent members. When the previous policy changed in 2013, they felt a sense of fully entering the Thrivent community.

“No matter what language Thrivent uses to back up the recent policy change, they are going to feel betrayed. What’s the old saying? ‘Once you’ve drunk the good wine….’ The good wine was given and then taken away. And, nearly everyone else at the table still gets the good wine. The LGBT groups affected by this change do not plan to be silent. And, I will be there with them with my voice.”

We are thankful for Greg and other Thrivent employees who are willing to stand against the new policy of exclusion. We pray for graceful and respectful engagement with Thrivent’s management team, and we hope that they will restore their partnership with us and with Extraordinary Lutheran Ministries.

We are calling on our members to stand with us and Thrivent’s LGBT employees like Greg to engage in helpful conversation with representatives of Thrivent toward a change of heart and policy.

In the last few years we have grown accustomed to progress. Prior to 2009 in the ELCA we had learned well how to lose, pick ourselves up, and continue our irrepressible and faithful trek towards full inclusion for God’s LGBT children and their families.

Fortunately, we are still irrepressible. For our members who are also members of Thrivent, you and we can work for change from within. The first step is to tell our own stories of why the ministry of ReconcilingWorks matters. The second step, ask the Thrivent management team to reconsider the exclusion of ReconcilingWorks which the ELCA recognizes as an independent Lutheran organization, ministry partner and resource.

We found one ray of hope in the announcement of the policy change: “the eligibility of specific organizations to receive outreach funding or support are made at the sole discretion of Thrivent’s management team and are subject to change.” It may seem like a tiny crack in a fortress, but fortunately the Holy Spirit needs even less to change hearts and minds.

In hope for a church and a world that welcome and include,

P.S. Thrivent is a Fortune 500, membership based non-profit. It is not a church. That said, most of Thrivent’s current members are Lutherans. Representatives of Thrivent are present at most Lutheran events, particularly this spring at ELCA synod assemblies.