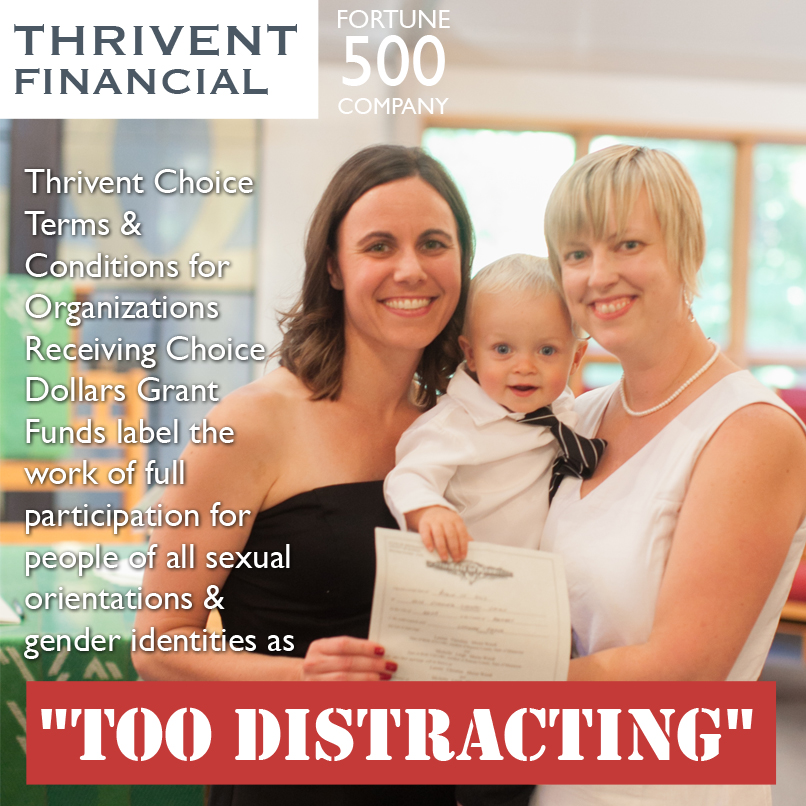 Following Thrivent Financial’s announcement in early February about its new “neutrality policy” for its outreach programs to its members, the leaders of ReconcilingWorks and our movement partner, Extraordinary Lutheran Ministries, met with some of the top management staff at Thrivent at its Minneapolis, Minnesota, office. Unfortunately, that meeting did not bring a resolution to the situation.

As a result, ReconcilingWorks issues the statement below.

ReconcilingWorks is deeply disappointed in the leadership of Thrivent Financial and the policy decisions it has made in excluding ReconcilingWorks and our movement partner, Extraordinary Lutheran Ministries (ELM), from Thrivent’s member-outreach programs. ReconcilingWorks and ELM are working toward full inclusion of LGBT people in the life of the church and society, and Thrivent’s actions are ones of exclusion and discrimination and do not advance the cause of inclusion.

ReconcilingWorks is surprised that a large institution, one based in Minnesota and on Fortune’s 500 list, a major actor in the Lutheran community with its financial resources, is moving against the wave of inclusion sweeping its own state, many of the denominations it now serves, and our nation.

While the loss of funds from this change in policy is notable, what is more important are the principles at stake in this situation. With the exclusions of certain organizations in its member-outreach programs, some contradictions remain in Thrivent’s execution of these programs. Two examples:

Matthew 6.21 says: “For where your treasure is, there your heart will be also.” Thrivent is no longer allowing its members to send its “treasure” to organizations like ReconcilingWorks, so we know its heart is no longer there either. ReconcilingWorks finds this particularly ironic, considering that Thrivent’s new logo is a heart with a cross in it.