ReconcilingWorks is working in coalition with seven other church-based LGBT advocacy groups at the World Council of Churches (WCC) assembly being held in Busan, South Korea. ReconcilingWorks staff member Tim Fisher, is representing our organization at the WCC this week. 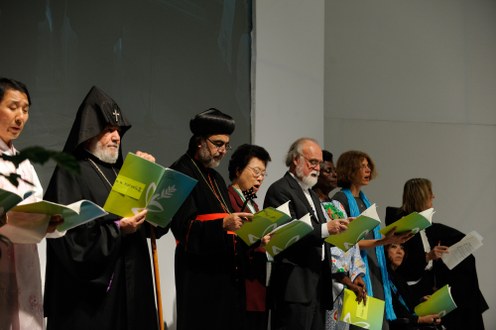 The Create Safe Space Caucus offers a mixed response to the opening day of the World Council of Churches General Assembly in Busan.

The opening worship, plenary and business session were well grounded in the gospel values of love, justice and peace.  His Holiness Karenkin II, Supreme Patriarch and Catholicos of all Armenians reminded participants, “Each of us is different… Our mutual faith in Christ—truly our love for the Lord—is what unites us.”  He proclaimed that Christ encourages us “to regard our fellow human beings, without exception, in the full dignity and holiness of their personhood.”

These values emanated from the liturgies, presentations and reports on this first day.  However, for the Create Safe Space Caucus the absence of any mention of sexual orientation or gender identity created the sense of invisibility.  How is it that in the Secretary General’s report, the Moderator’s report and in every other word, spoken or sung, that such silence should exist on such a critical issue facing the churches throughout the world?   A simple acknowledgment that this is an issue facing the church would have been a step in the right direction.

Silence on sexual orientation and gender identity perpetuates the stigma and discrimination faced by marginalized people and increases vulnerabilities. This is particularly poignant today, as many will observe Thursdays in Black, a movement towards a world without rape and violence.  Sexuality, sexual orientation and gender identity are part of what it means to be human.  Thus, these are concerns which are part of life in every community throughout the world, including other marginalized communities which may also feel invisible.

Any serious effort toward justice and peace must address stigma and discrimination in relation to sexual orientation and gender identity.  At the very least, the concern must be named along with a commitment to creating safe spaces for constructive dialogue.

The Create Safe Space Caucus is an international collaborative committed making spaces at the WCC General Assembly where the invisibility of issues related to sexual orientation and gender identity can be brought to light; where people may share their stories and witness to the worth and dignity God has bestowed on every human being, and which human judgment cannot set aside.

Create Safe Space Conversations will take place at the lunch break at 12.15 on Friday and Wednesday, 1 and 6 of November in Bexco Room 101.  Key participants in these conversations will be Elders from Africa, including Bishop Christopher Senyonjo of Uganda.