On October 14, a service of Reconciliation and Healing was held at First United Lutheran Church, San Francisco, to mark an important decision in the life of the congregation: to accept the Sierra Pacific synod’s invitation to return to the ELCA so that they may better proclaim their prophetic witness and continue their ministry to church and society. With great joy, ReconcilingWorks celebrates with the congregation in this decision. Congratulations to First United, the Sierra Pacific Synod, and the ELCA!

First United’s journey to this day was not easy. In 1996, the congregation was expelled from the ELCA for having called and ordained Jeff Johnson as pastor in 1990. At that same time, St. Francis Lutheran, also of San Francisco, was similarly thrust into controversy, disciplinary action, and expulsion when that congregation ordained Ruth Frost and Phyllis Zillhart as pastors. 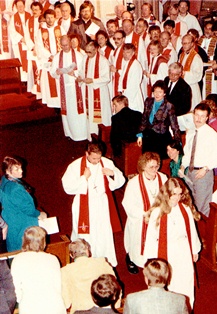 Both congregations extended these calls to service in faithful response to the baptismal call to be the church in God’s world. As such, these calls were also principled acts of ecclesiastical disobedience. The policy of the time was that ministers living in committed, same-gender relationships were precluded from service in the ELCA. The actions of these congregations led to the movement that became Lutheran Lesbian & Gay Ministries, which then became the Extraordinary Candidacy Project, and which eventually led to the formation of Extraordinary Lutheran Ministries. (See elm.org).

In 2009, the ELCA Churchwide Assembly ended the policy discriminating against ministers living in committed, lifelong, same-gender relationships. In 2010, Jeff, Ruth and Phyllis were received onto the roster of ELCA clergy, with their 1990 ordinations and their subsequent ministries recognized by the national church.

The Rev. Susan Strouse, pastor of First United since 2004, wrote in her personal blog: “To say that the wounds of that expulsion have disappeared or no longer have some spots that are still sore would be wrong. Wounds must be acknowledged and treated with tenderness. But we must also acknowledge and be open to the healing work that is happening within us. Then we truly become, as Henri Nouwen described, ‘wounded healers,’ using our stories for the good of others. That is what [we celebrate]. That is the hope that we hold out to others as well. That is the church at its best.”

The Rev. Mark Holmerud, bishop of the Sierra Pacific Synod (ELCA) and 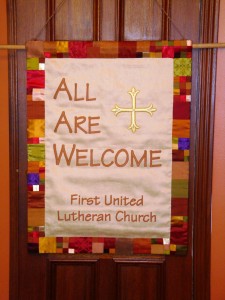 preacher for the October 14 service, thanked First United for its steadfast witness. He said, “It’s important to say that you never left. You’ve been here, leading the San Francisco Conference, the Sierra Pacific synod, the ELCA, and faith communities throughout the world . . . . Thank you for the faithful witness you have offered and will continue to offer of the reconciling love of Christ that changes our lives and will not let go of us, until the world itself will be reconciled to God. And beyond what you have done to serve well the people of San Francisco, you have helped to change the landscape of Christianity itself so that, more and more, the radically inclusive love in the ministry of Jesus Christ is what we are becoming known for, in a world that is waiting to receive this good news, through us.”