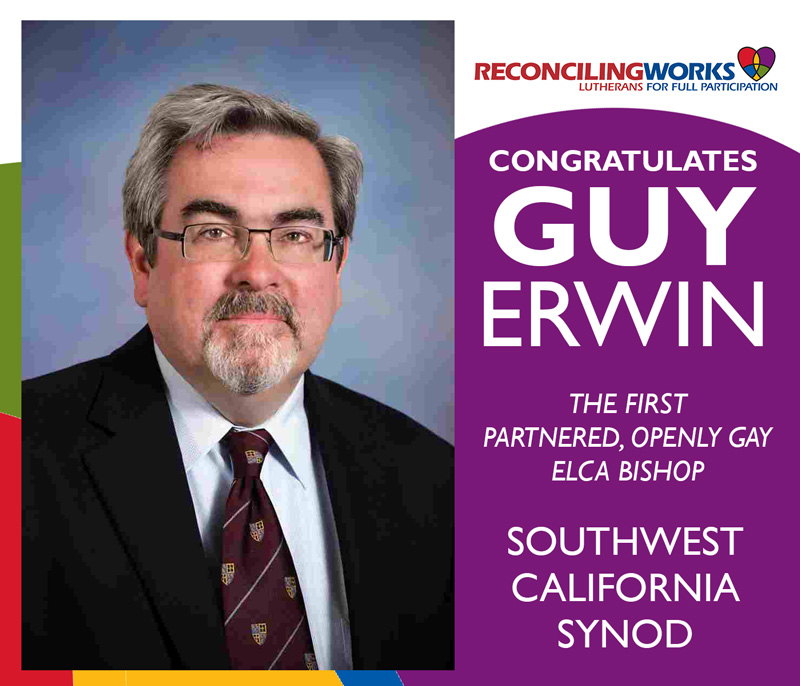 ReconcilingWorks: Lutherans for Full Participation celebrates the election of the Rev. Dr. Guy Erwin as Bishop of the Southwest California Synod of the Evangelical Church in America (ELCA), during the synod’s three-day annual assembly in Woodland Hills, California.

This election of a partnered and openly gay member of the clergy marks a historic first for the ELCA. Erwin will serve as one of 65 synodical bishops in the denomination. Bishops function as spiritual leaders, administrators, and chief executive officers of synods which are, save one, geographical collections of congregations.

“The election of Pastor Erwin to the office of bishop occurred because he was the best candidate, not because he was a partnered gay man. Pastor Erwin is an eminent scholar and church leader. He is a teacher at heart and was an excellent pastor long before he was ordained in 2011. In many ways his election is simply the logical and appropriate next step for our denomination following the 2009 elimination of policies precluding pastors in committed same-gender relationships,” said Emily Eastwood, executive director of ReconcilingWorks.  “In other ways, Pastor Erwin’s election marks a new and brighter day for lesbian, gay, bisexual and transgender Lutherans as one of our own has been chosen not in spite of being gay, but because he is truly gifted and skilled for the office. Once again, today we are proud to be Lutherans.”

Prayer, discernment, and the Holy Spirit led the voting members to choose Pastor Erwin as their leader.  Voting members chose a bishop based on their own consciences, not bound by the views of their congregations but by the Gospel with its call to invite everyone to the table.

ReconcilingWorks (previously known as Lutherans Concerned) worked for decades to lift the ban on partnered gay and lesbian clergy.  In 2009, the ELCA Churchwide Assembly voted to lift the ban, in place since 1989.

Rev. Dr. Erwin holds the Chair of Lutheran Confessional Theology professor at California Lutheran University and directs the Segerhammar Center for Faith and Culture.  A native of Oklahoma, he is an active member of the Osage Nation of Native Americans. He has served as the ELCA representative to the Faith and Order Commission of the World Council of Churches, as board member of Augsburg Fortress Publishers, and as member of the ELCA Higher Education Task Force.  An ordained minister in the ELCA, Dr. Erwin and his partner, Rob Flynn, attend St. Matthew’s Lutheran Church in North Hollywood, California.